For Jastrzębie Brewery we have conducted a media relations campaign connected to its stock issuance on the equity crowdfunding platform Beesfund.

For Jastrzębie Brewery, 2021 was an intense year full of breakthroughs. It was in June when the first building of the brewery opened. This was possible due to a very successful crowdfunding campaign from 2018 and 2019.

In order to continue its development, Jastrzębie Brewery has started its second stock issuance.

A few words about our client

It all started in 2013 when brewers from Jastrzębie received a gold medal during the homemade beer competition. As a company, Jastrzębie Brewery has been functioning since 2017.

Equity Crowdfunding action conducted in 2018 allowed for both the renovation and adaptation of buildings previously bought for the brewery and for the acquisition of brewing equipment.

Jastrzębian products appeared on the shelves of Carrefour and Kaufland in 2020. A year later, Jastrzębie Brewery’s building was officially put into service.

Goals for cooperation with Jastrzębie Brewery

The main goal of our communication actions was to tell people about the equity crowdfunding campaign of Jastrzębie Brewery. We were to reach as many potentially interested people as possible.

Thus, we informed about the company’s actions, the development of the brewing industry, and the trends that will dominate this area in the upcoming years.

We produced a creative package for 10 journalists from business and consumer editorials. In the gift packages, the journalists received Jastrzębie Brewery products that drew the most attention from clients.

The whole process of creative shipment and reaching out to the media met with full success.

The next step was to contact the journalists. This included both those that received the packages and many others that received our press notes.

We then conducted a reliable follow-up in which we promoted the Jastrzębie Brewery’s work.

Results of our actions

The results of our creative shipment, press releases, and follow-up were numerous articles and interviews with the company’s chairman.

These were published in business media such as Extra, Dla Handlu, Wiadomości Handlowe, Comparic, Portal Spożywczy, My Company Polska. All told, there were 12 publications published. 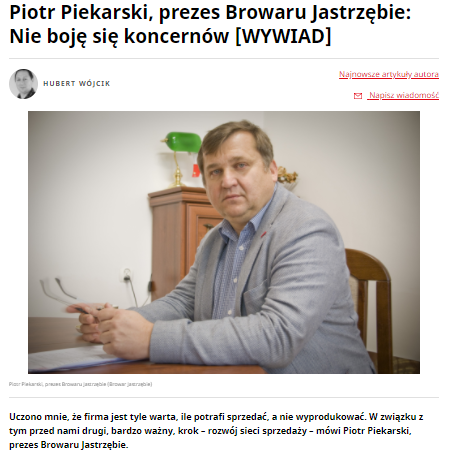 We are very glad that the information about the Jastrzębie Brewery’s work gained so much attention. The industry of craft beers is booming right now.

It gives us great satisfaction that through our work we were able to help with that.

Let’s create something together!

You’ve got an idea for a project?
Do you want to talk about cooperation opportunities?
Contact us!

Check out our projects

Do you want to know more about our activities?
Read our Case Study section, which illustrates our work even better!

This website uses cookies to improve your experience while you navigate through the website. Out of these, the cookies that are categorized as necessary are stored on your browser as they are essential for the working of basic functionalities of the website. We also use third-party cookies that help us analyze and understand how you use this website. These cookies will be stored in your browser only with your consent. You also have the option to opt-out of these cookies. But opting out of some of these cookies may affect your browsing experience.
SAVE & ACCEPT